Bodies of rodents involved in preparing a mortar after a rocket they were handling exploded killing them all at ‘Uyoon Hussayn. (See report below).

AL-HISSN: Fresh from an astounding triumph in Al-Zaara, the SAA and NDF have liberated over 700 women and children yesterday in the neighboring Christian town of Al-Hissn and Al-Shuwayhid and accepted the surrender of 25 former rodents who asked for consideration under the Amnesty Law. These people gave reports to SANA of widespread religious persecution, denial of right to prayer, theft of personal property and most horribly, the use of human beings as shields against the onslaught of the legitimate Syrian military.  The assault on Al-Hissn is taking shape as I write.  The orders are to kill all foreign rats.

Also, at Al-Hissn yesterday, the SAA destroyed a van killing 3 of its passengers.  No names available. 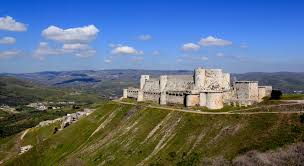 This is the laureled Krak de Chevaliers at Al-Hissn.  It is a remarkable site that outshines the legendary Citadel in Aleppo.

Al-Sultaaniyya:  East of Abu ‘Alaayaa, the SAA wiped out an entire pack of 20 filthy rodents calling themselves the “Commandos of Baabaa ‘Amr” (Maghaaweer Baabaa ‘Amr. yawn)

The rest were not named.

Talbeesa at ‘Uyoon Hussayn Village: SyrPer is always delighted to report misfires on the part of the rodents.  Yesterday, a pack of rats was preparing a mortar to fire at surrounding villages.  Somebody must have mishandled a rocket and caused it to explode.  Terrible mistake, really.  Won’t happen again because all 6 rats were killed.

The other 2 were not identified as their bodies were blown into smithereens.

Jawrat Al-Shiyyaah in the city:  4 miserable cockroaches surrendered and asked for settlement of their status pursuant to the Amnesty Law.

Al-Qaraabees in the city:   The SAA liberated 2 hostages whose names were actually announced:

Also, at Al-Qaraabees, one rat surrendered and turned over close to 50 assault rifles to the NDF. THANK YOU, PRINCE NAAYEF THE ORANGUTAN.

Ruhoom:  Fighting with no details.

DER’AH:  If any of you are concerned about the southern front, let me disabuse you now of any anxiety.  The SAA is delivering knockout after knockout here:

Umm Al-Mayaadhen Farms:  Yesterday, these insects were transported to Satan’s Zoo in Hell:

Muhammad ‘Abdul-Kareem Abu Hasheesh (put that in your pipe)

Another 4 could not be identified. No survivors.

Details not in yet, but close to 50 rats were killed yesterday in these areas:  Al-Naaziheen Camp, Al-Sultaan Fuel Station near the city and Al-Nu’aymaat.

Rusoom Al-Dhahra and Al-Mudawwara in Al-Lijaat north of Der’ah, a truck loaded with weapons from Jordan was stopped, its driver arrested and tons of rifles and ammunition given to our NDF. Once again, let’s thank Obama and “Prince” Naayef the Slug for the nice contribution to our military effort.

Yabrood at the Granaries in the direction of Reemaa Farms, the SAA killed these creeping vermin trying to escape:

Our compliments to the Barakaat Family of vermin.  We hope your issue enjoy their long sojourn in the flames of Hell.

Dayr Al-‘Asaafeer south of Al-Maleeha: A cache of weapons was uncovered thanks to the help of citizens.  All weapons given to NDF and these 3 “rat leaders” were sent to the hot gates:

Another 7 were killed with them.

Al-‘Aaliya Farms in Doumaa: In a high quality operation, a nest of rodents was invaded by SAA and these were killed:

Another 7 were not identified.

Jawbar: (Near the Health Center) Pursuit of a pack of vermin led to these carcasses:

The other 2 were foreigners not carrying papers.

Khaan Al-Shaykh: Skirmishing with no details.

Yarmook:  The PFLP-GC has begun its campaign to extract the terrorist J.N. rodent who have reoccupied part of the camp.  We will have more details as they arrive.

ALEPPO:  JUST A NOTE TO OUR READERS, THE SAA HAS REACHED ‘ANADAAN AND FIGHTING IS REPORTED THERE NOW.

Even the Washington Post has to admit that Putin is enormously popular despite what Obama tries to do with the media. Imagine that Putin’s positive rating is the same as Hollande’s negative one!

So, Merkel wants to taunt the bear? Let’s see how cold her winter is going to be:

Maria sends this Wile E. Coyote classic. See, men were meant to fly one way or another:

Hi Ziad, great stuff, tks for keeping the fighting on. Was puzzled with the comment on Annadan, this way far from the Northeastern front that is fighting pigs in the the industrial city and close to Central Prison and Hadarat, so is this attack coming from the Northwest by the SAA or there was a by pass at Central prison to reach Annadan ? Should Annadan fall to SAA then Aleppo falls quickly back to the Syrian Government, inshallah.

The attack will be a typical vise-like maneuver with forces stationed inside Nibbul and Al-Zahra acting like the upper jaw and the SAA from the south as the lower jaw. Like Yabrood, the rats will have no access to reinforcements or resupply. They know it’s coming too because reports are they are fortifying their defenses inside ‘Anadaan. Ziad

SAA done a great work, so far. Give them support, while total success is imminent! Let them keeping on keeping on!
cc

Oh, they’re not going to stop until the last cockroach has been stomped out of existence. Ziad

In case anyone missed it, here’s a nice video of Dr. Assad’s visit to refugees in Adra: http://english.farsnews.com/player.aspx?nn=13921222000210 At times Dr. Assad seems a bit awkward–you can see his fists clenched at the beginning. This is a good thing, though–he’s a sincere, thoughtful problem solver, not a phony glad-handing used auto salesman (that’s Netanyahoo, who was wearing my kid sister’s ski jacket from the 1970s in his photo op, the weirdo). When Dr. Assad asks an old woman for the name of the medication her bed-ridden husband needs, you get the sense he’s completely sincere about making sure he gets… Read more »

The son was three months old when the husband went missing. It isn´t a three old baby. Your mind is pretty hot, chill down.
Free the Basque Country.

Don’t forget, Dr. Assad is a trained physician. Thanks for the tape. Ziad

“Muhammad Zaytooni”–with a name like Zaytooni, I bet he’s the one who screwed up with the mortar shell! The spelling makes it hard to take him seriously. Thankfully no one has to anymore.

It’s occurred to me that “Zaytooni” might be a legit Syrian name.
To all the Zaytoonis who aren’t butter-fingered gangster screw-ups, my sincere apologies. 🙂

He’s was quite a looney, that Zaytooni. Ziad

Fantastic Wile E Coyote moment today- those Salafist savages were given a free flying lesson by the SAAF.

They were singing the theme for the “Flying Nun”. Ziad

I particularly enjoyed todays Wile.e Coyote moment. Seeing those inert terrorist bodies flying thru the air and then plummeting lifeless onto the rich soil of Syria filled me with…well, joy, to be honest. Dr. Assad has made a monkey out of a hell of a lot of scumbags over the past few years and I for one would award the man a Nobel Peace prize (or 3). Great stuff Ziad – thanks for the updates.

Always a pleasure. Unfortunately, the Nobel Prize is only awarded to people approved by the West. Let’s give him the Omayyad Medal. Ziad

You are welcome. Unfortunately, the Nobel Prize is only awarded to persons approved of by Western miscreants. Let’s give him the Omayyad Medal. Ziad

I am sad for having to disappoint you, but those are not terrorists bodies. The tragectory is not apropiate for flying bodies. I can´t tell you what they are, but definitily they not bodies.
Free the Basque Country

I’m no expert on the Flying Wallendas, but those do look, at a minimum, like flyjng mannequins. Ziad

The power of an explosion to make a body fly that high would have shred the bodies. We are mainly water.
However, congratulations for the news that are comming fron Yabroud, i didn´t think it would be that fast. I thougth the mercenaries would have offered a greater resistance. That proves the professionalism of the actual resistance forces.
Free the Basque Country.